Darby recently completed a very interesting project, and we thought we would share the details. 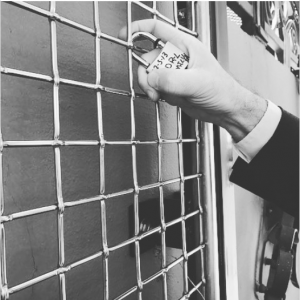 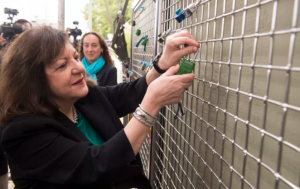 This project was for a special cause, and we were happy to be a part of it. For more information on this project, please visit: https://philly.curbed.com/2017/10/12/16464356/love-lock-fence-philadelphia-hope-fence.

We’re back! I know this blog has been silent lately, but now that our Philadelphia Eagles have the best record in the NFL, we’re ready to shout out our support for our home team from the rooftops!

To be honest, though, it’s been a while since the Eagles have been this good. In fact, the last time our city was swept up in football fever was in 2005 when the Eagles lost to the New England Patriots in the Super Bowl. During that season, the team was lead by QB Donovan McNabb, WR Terrell Owens and RB Brian Westbrook.

This time around, the Eagles have Carson Wentz, a “North Dakota Tough” quarterback, who holds this city’s destiny in the palm of his hands. In his second year, Wentz has already been mentioned in the MVP conversation.

It turns out that Carson and the rest of the Eagles are big fans of baseball. In fact, the birds have used the NFL’s relaxed touchdown celebration rules to pretend to play baseball.

The Eagles are also big fans of baseball star (and fellow Eagle fan) Mike Trout. Mike Trout can be found at most games, and often times, after a touchdown, the Eagles will find him and celebrate with him. This image caught our eye this past weekend: Mike Trout and his buddies posing for a picture with a football given to them after the Eagles beat the 49ers on Sunday October 29, 2017.

However, as a wire mesh blog, what we really saw was this:

P.S. We realize that championing the Eagles this early in the season is not smart. We are also very superstitious. So, should this season end up poorly, we are very sorry!!!

“It (wire mesh) had transparency, and also it reflected light. It was delicate but strong, smooth to the touch, but also could draw blood if not handled properly.”

Recently, one of Darby’s customers was featured in Southwest Journal, Southwest Minneapolis’ community newspaper. Over the years, Darby has worked with numerous artists, and we’re proud to say that Kristi Swee Kuder is another one of our favorite artists.

A trained artist, Kristi wrestled with the effects of mental illness on her youngest son and became inspired to explore her creative side using a product that is both messy and beautiful.

Let’s face it: wire mesh is an industrial product, and as such, it isn’t the most glamorous thing in the world. Whether it’s plain steel wire mesh or galvanized wire cloth, wire mesh is commonly used in industrial applications like filtration and separation. Wire mesh is made to take a beating, as they say.

So, when we at Darby Wire Mesh stumbled upon artist Edoardo Tresoldi, our collective jaw hit the floor and we said: WOW.

Forbes Magazine recently included Mr. Tresoldi among the 30 most influential European artists under 30. Born in Italy, Edoardo studied in Milan and Rome, and, according to his website (https://www.edoardotresoldi.com): he “plays with the transparency of mesh and with industrial materials to transcend the time-space dimension and narrate a dialogue between Art and World.

At this point, we think it is important to note that Darby Wire Mesh did not supply any of this mesh to this artist. We found many of the images below, and we were frankly blown away. This is an absolutely incredible achievement, and we thought we should share it with our readers.

As we’ve studied his creation, from video clips (Making of Mesh Tresoldi) to other publications (Expansive Pavilion | Wire Mesh Sclupture | Edoardo Tresoldi ), we venture to guess that Edoardo is using a Galvanized Welded Wire Mesh. The mesh opening size is likely around 1″ x 1″ or 2″ x 2” and features a substantial diameter wire. The wire must be rigid enough to hold its own weight and be light enough to bend, cut, and work with.

These sculptures were created for a royal event in Abu Dhabi. These domes and columns are lit from both above and below and create a translucent, almost ghost-like appearance that harkens to Tresoldi’s modern aesthetic. Source: www.thiscolossal.com

Did you know that the Super Bowl is one of the most watched annual sporting events in the world? We at Darby Wire Mesh bet you did know that and that you likely watched this year’s Super Bowl between the New England Patriots and the Atlanta Falcons.

And, to no one’s surprise, marketers do too! That is why, according to www.fortune.com, the average cost for a 30 second TV commercial during the 2017 Super Bowl between the Patriots and Falcons was $5 Million.

Some of the commercials that you will see during the Super Bowl will certainly make you laugh; others will likely tug at your heart. And come Monday morning, everyone will be talking about these commercials.

We at Darby Wire Mesh also assume that you will also see an advertisement with a scantily clad woman promoting a beer or a handsome man selling yogurt.  In other words, these commercial spots attempt to sell a product or promote a brand through sex.

Darby Wire Mesh never believed we would see the day when someone attempted to make Wire Mesh sexy, but it has happened. Originally brought to our attention by www.kotaku.com, a website that follows the video gaming industry, it appears there is a Taiwanese Wire Mesh Company that is using Sex to sell Wire Mesh!

Below, please find some of the photos these Taiwanese company uses to promote its wire mesh, and to read the article, click here: http://kotaku.com/proof-that-sexy-advertising-is-plain-silly-1511431464

At Darby Wire Mesh, there is no need for us to resort to sex in order to sell wire mesh. Here’s our bottom line: Darby Wire Mesh is one of the country’s preeminent and most trusted suppliers of woven and welded wire mesh, and we have been for over 150 years. As a family owned company, we are dedicated to serving our customers, from the large industrial user to the small machine shop (and everyone in between).  Our knowledge of the domestic and global industry is second to none; and our expertise in our products can assist you in finding the right wire mesh for your application.

We believe that we do not need to use sex to sell wire mesh…plus, I do not think you want to see this blog in a swimsuit!

Playing songs like “Stairway to Heaven”, “Hotel California” and “Sweet Emotion”, WMGK 102.9 is Philadelphia’s classic rock station. One of the station’s popular radio personalities is Andre Gardner. If you are from the greater Philadelphia area, there’s no doubt you know his voice and appreciate his knowledge of classic rock.

He recently shared a photo, and, as wire mesh people, we were intrigued. This is a photo of a Neumann microphone, commonly cited by experts as the top in the world. These microphones are often used for live performances and are considered of the utmost quality.

This microphone prominently features wire mesh. If you are an expert in the microphone world, we’d love to hear from you. Please let us know what we need to know about this microphone. Email us at: [email protected]

Offering a brief yet detailed summary of how wire mesh is priced, one of the most visited pages of our website is the pricing page, which can be found here: https://www.darbywiremesh.com/pricing/#pricingQuestions.

One of the things that is sometimes overlooked when requesting a price quote is quantity. It is critical that our customer determine how much material they need for his/her specific application. Whether you require a stock item or need an item that is custom manufactured, determining how much you need is essential because, by and large, pricing is quantity based.

Many of the mesh specifications Darby keeps on the floor are manufactured and stocked in full 100FT rolls. The widths of these rolls are usually 36”, 48” and 60” wide. Often times, Darby sells these items in full 100’ roll quantities, but we also routinely cut these rolls down to shorter pieces, like 4’ x 10FT or 3’ x 25FT sections.

Darby Wire Mesh also likes to remind customers that we are happy to discuss your requirements and options when you need a custom manufactured specification or a unique specification that is not commonly available from stock. Again, especially in these instances, knowing how much you need will help us help you better!

Selecting the appropriate material is critical when deciding to use wire mesh for infill panels – stainless steels, plain steel and galvanized are very popular. Other metals and alloys, such as copper and its alloys, are sometimes used to create an upscale look, particularly in high-end restaurants or residences.

The Fall Classic. The World Series.

The 2016 World Series is between the Chicago Cubs and the Cleveland Indians, and, so far, it has been a great series. We at Darby Wire Mesh have been glued to the series, mostly because we love the game of baseball. It also reminds us when our Philadelphia Phillies won the World Series in 2008.

One of the neat things about watching the World Series on TV is the shots of the crowd. You can absolutely see how invested the teams’ fans are…especially the fans of the Cubs. After all, it’s been almost 100 years since they have won the World Series!

In watching the game on Sunday October 30th, we saw a great image of wire mesh in the background. Oh, and in front of the mesh: Jim Harbaugh (right), head coach of the University of Michigan Football team, and his father (left).

After zooming in on the photo, it appears the mesh is a Lock Crimp Woven Wire Mesh, that has been rotated 45 degrees to create a diamond orientation. It was then likely placed into a channel and painted and/or coated in green. For more information about wire mesh that is used in infill panels, please visit: https://www.darbywiremesh.com/infill-panels/